Prokaryotes Vs. Eukaryotes: What Are the Differences 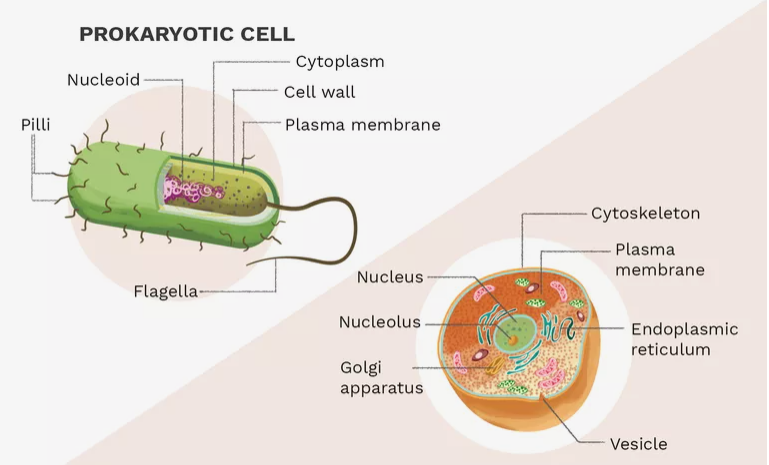 The cell is a fundamental component of our modern definition of life and living things. Cells are regarded as the basic building blocks of life and are used in the elusive definition of what it means to be "alive."

FEATURED VIDEO
What Is a Prokaryote?
Cells keep chemical processes tidy and compartmentalized so individual cell processes do not interfere with others and the cell can go about its business of metabolizing, reproducing, etc. To achieve this, cell components are enclosed in a membrane which serves as a barrier between the outside world and the cell's internal chemistry. The cell membrane is a selective barrier, meaning that it lets some chemicals in and others out. In so doing it maintains the chemical balance necessary for the cell to live.

The cell membrane regulates the crossing of chemicals in and out of the cell in three ways including:

Prokaryotes are organisms made up of cells that lack a cell nucleus or any membrane-encased organelles. This means the genetic material DNA in prokaryotes is not bound within a nucleus. In addition, the DNA is less structured in prokaryotes than in eukaryotes: in prokaryotes, DNA is a single loop while in Eukaryotes DNA is organized into chromosomes. Most prokaryotes are made up of just a single cell (unicellular) but there are a few that are made of collections of cells (multicellular).

Scientists have divided the prokaryotes into two groups, the Bacteria, and the Archaea. Some bacteria, including E Coli, Salmonella, and Listeria, are found in foods and can cause disease; 1 others are actually helpful to human digestion and other functions. 2 Archaea were discovered to be a unique life form which is capable of living indefinitely in extreme environments such as hydrothermal vents or arctic ice.

Eukaryotes are organisms made up of cells that possess a membrane-bound nucleus (that holds DNA in the form of chromosomes) as well as membrane-bound organelles. Eukaryotic organisms may be multicellular or single-celled organisms. All animals are eukaryotes. Other eukaryotes include plants, fungi, and protists.

A typical eukaryotic cell is surrounded by a plasma membrane and contains many different structures and organelles with a variety of functions. Examples include the chromosomes (a structure of nucleic acids and protein which carry genetic information in the form of genes), and the mitochondria (often described as the "powerhouse of the cell").