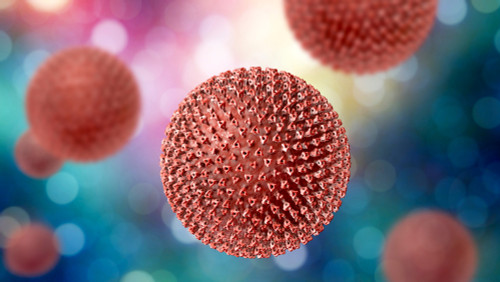 Recombinant gene product from Toscana virus glycoprotein 2, corresponding to amino acid 838-1304 of the M segment polyprotein. A glycine-serine linker and a human IgG1 Fc-tag was fused to the C-terminus of this protein. The fusion protein was co-expressed with the corresponding unloaded human IgG1 Fc chain.

The M segment is 1339 amino acids with a molecular weight of around 149 kDa and nine glycosylation sites. It encodes three proteins, Nsm (30 kDa) and two glycoproteins G1 and G2 (Gn and Gc, respectively) of the same molecular mass (65 kDa). The carboxy half of the M gene product and the hydropathy profile of the M pre-cursor protein has high identity to other phleboviruses, suggesting a common trans-membrane topology. These proteins are the most variable proteins among the phleboviruses, and they could play a very specific role in each virus. G1 and G2 glycoproteins are likley to be responsible for the host virus-cell interactions and are thought to have the most important protective role in stimulating antibodies against the disease in humans.

Toscana virus (TOSV) or Sandfly fever Naples phlebovirus (SFNV) is a member of the genus Phlebovirus of the family Bunyaviridae. TOS virus is one of the most important etiologic agents of meningitis and meningoencephalitis in countries of endemicity (Spain, Portugal, Italy, and Cyprus). It was first isolated in the Tuscany region of central Italy from P. perniciosus and P. perfiliewi in 1971 and 12 years later was detected in the central nervous system (CNS) of patients with meningitis. Because of the geographic spread of TOSV in southern Europe and surrounding countries and the growing number of human cases, TOSV is recognized as an emerging pathogen and one of the most common causes of summer meningitis in the Mediterranean Basin.

TOSV is an enveloped, single-stranded, negative-sense RNA virus. The viral genome is segmented, having three segments that are referred to as large (L), medium (M) and small (S). These segments encode the viral RNA-dependent RNA polymerase, envelope glycoproteins, nucleoproteins and non-structural proteins.The single-stranded RNA segments have high mutation rates due to the lack of proofreading activity of the viral polymerase, which may result in genetic drift following point mutation, while the 3 genome segments are involved in reassortment/recombination, leading to the generation of new viruses.