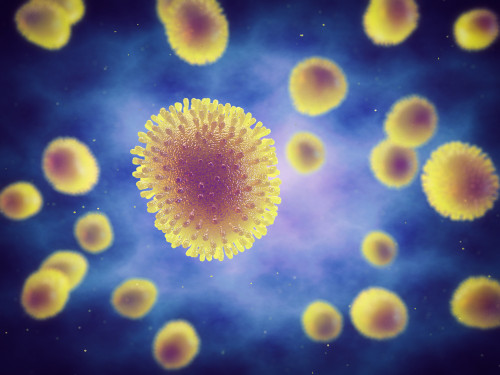 This Influenza virus neuraminidase protein is derived from the NA sequence of the A/Thailand/1(KAN-1)/2004 (H5N1) strain, (Accession # H8PF47), expressing His36- Lys449, and is fused with a polyhistidine tag at the C-terminus. The total calculated MW is 46.1kDa. The Influenza virus neuraminidase protein is expressed in HEK293 cells, and reduced protein migrates as a band of 48kDa.

Influenza virus neuraminidase (NA) is a mushroom-shaped tetramer of identical subunits. Each of the subunits that form the head of the mushroom is made up of a propeller-like structure, the blades of which are formed by four antiparallel strands of β-structure. The enzyme active site is located at roughly the center of each subunit. During virus replication, Influenza virus neuraminidase removes sialic acid from cellular glycoproteins and glycolipids and from both of the virus glycoproteins. As a result, newly assembled viruses are prevented from binding to the infected cell surface and from aggregating with each other through HA-sialic acid interactions. Instead, they are released from the cell to infect new cells and spread the infection.The structure of NA has been reviewed by Gamblin and Skehel in 2010.