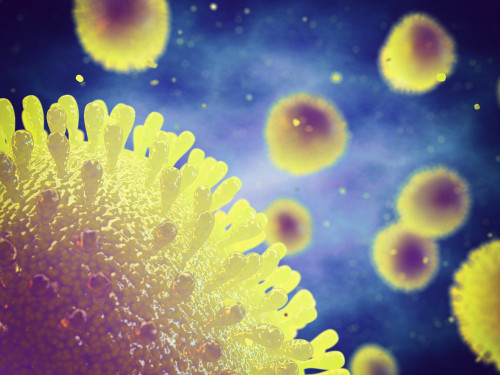 This Influenza virus hemagglutinin protein is derived from the HA sequence of the A/Shanghai/2/2013 (H7N9) strain, expressing Asp19- Asp521, and fused with a polyhistidine tag at the C-terminus. The total calculated MW is 53.6kDa. The influenza virus hemagglutinin protein is expressed in HEK293 cells, and DTT-reduced protein migrates as a band of 63-75kDa.

Influenza virus hemagglutinin (HA) is a trimer of identical subunits, each of which contains two polypeptides that result from proteolytic cleavage of a single precursor. The two polypeptides are designated HA1 and HA2. The HA2 monomer is a long helical chain, anchored into the membrane, and is “topped” by a “globule” of HA1. Cleavage of the precursor is essential for activation of membrane fusion potential and hence infectivity. For HAs of most subtypes, the site of cleavage is a single arginine residue, and cleavage occurs extracellularly by an as yet unidentified enzyme. However, some members of the H5 and H7 subtypes have acquired a series of basic residues at the cleavage site, which are recognized by an intracellular subtilisin-like enzyme. In these cases, cleavage is efficient, virus infectivity is high, and the viruses are highly pathogenic. The avian H5 influenza, which continues to spread throughout the world, excluding the Americas, is caused by such viruses. The structure of HA has been reviewed by Gamblin and Skehel in 2010.